Of the seven days that we were in Iceland the drive from Vik to Jokulsarlon was the scariest. Normally this drive would be pleasant and scenic but today was the day that the massive storms were hitting the South of Iceland and we were driving through the middle of it. If you missed the first two parts of my Campervan adventures in Iceland you can read Part 1 here and Part 2 here! I don’t want to turn you off going to Iceland, sure the weather can be a bit grumpy sometimes but Iceland is an amazing country with such diverse beauty and it really is a place that should be on the top of your bucket list.  We were just extremely unlucky to be there when these storms were passing by. By the time we got to Jokulsarlon the weather had miraculously cleared for a while so let me show you the beauty of south of Iceland…..

After leaving Vik we drove all day in blizzardous conditions and unfortunately the Ice Cave Tour that we had booked was cancelled. All day the sky was grey, it was raining, snowing, hailing and 70km winds. We passed a car that had run off the road into the snow just after a patch of black ice that was on the road. The snow was up to the windows of the car that’s how deep it was. When we pulled over to check if they were ok, they said that they had been there for 12 hours waiting for the police to come and pull them out. One of their friend’s had arrived at the same time as we did to try and help them out so we went on our way again!

We stopped for a break near some snow capped mountains on the way to Jokulsarlon.

About 10 minutes before we got to Jokulsarlon the skies cleared. It was still windy as anything and we were driving along a stretch of road that had snow fields on either side and the snow was starting to melt which was creating these massive beautiful blue pools of water so of course I went crazy taking photos of it. This is also the area that they do ski mobile rides as we could see them set up on the snow over in the distance. I will be adding that activity to the list the next time I go to Iceland.

Further down the road we arrived at Jokulsarlon Glacier Lagoon which is one of the greatest wonders of nature in Iceland. This lagoon is a recent one, the result of a warming climate. The surface is at sea level and sea water flows into the lagoon at high tide. Huge blocks of ice constantly break off the glacier, Breiðamerkurjökull, and large icebergs float on the lagoon. The lagoon is not very wide but it is up to 250 meters deep which makes it the deepest lake in Iceland. Smaller icebergs float under the road and out to see and some can get washed up on the black sand beach which can look amazing at sunset and sunrise.

This place was truly amazing to see and I spent quite a bit of time walking around the edge of the lagoon exploring all the icebergs. It was so nice to see some blue sky and sunshine. I then headed across the road to the black sand beach where there were some icebergs getting washed up onto the beach. I spent about two hours photographing all the different chunks of ice and dodging waves. It was quite funny to watch actually as there were about 30 other photographers also on the beach and we were all down near the water trying to get close up shots of the ice and then a huge wave would come in and we would all pick up our cameras and run like little birds trying to not to get wet.

We were staying the night at a farm house in Brunholl which was about 30 minutes from the glacier lagoon. This place was a dairy farm run by the family who were so lovely. We had the most amazing home cooked meal and the lady who runs the place saw me checking my iPhone to see if the Aurora was going to be around that night and said that if she saw it she would come and knock on our door and let us know. About 30 minutes after being back in our room there came a knock at the door and the lady telling us “the lights are out!” It was about 9:30pm and I was so tired from such a big day but you can’t waste any opportunities when it comes to the northern lights so we got rugged up and jumped in the van and headed down the road. After about 15 minute we found a spot where we could see some faint green light and pulled over to take some shots.

After photographing all the possible angles from where we were we kept driving down the road and ran into another snow storm. It was pelting ice at us so we had to slow down to 40km’s because we could hardly see where we were driving. After about 15 minutes it finally cleared and the wind had disappeared just as we reached Jokulsarlon Glacier lagoon where the Northern Lights were reflecting in the water as icebergs clunked around and seals frollicked in the darkness.

We got back to our accommodation at 1:30pm once the northern lights had disappeared for the night. The next day it was grey and raining all day. We went for a drive to Hofn for a bit of a look around and found some more beautiful horses to play with! The white horse was so friendly and kept trying to eat my camera as I was taking pictures of it. The brown horse was getting jealous and kept nudging the white horse. They were so cute!

The next day we got up early for sunrise at the Glacier Lagoon as the rain had cleared and there was a nice break in the clouds. Plus we had the massive drive back to Reykjavik so we wanted to get away early. Sunrise was really beautiful and it was so peaceful watching the chunks of ice moving around as the sky turned all shades of pink and lilac.

After the sun had risen and I had taken too many photos at the glacier lagoon we jumped back in the car and only got 5 minute up the road when we had to stop and take some more photos as the sun was shining and their was blue sky with white snow and blue pools everywhere. It was so pretty.

We made one more stop at Skogafoss again for a selfie and then drove back to Reykjavik.

The landscape changes so dramatically and after a whole day of rain the previous day there was a massive snow melt and all of the snow that we had seen on the way to Jokulsarlon has melted and the rivers were full of water. It was crazy that the snow can all disappear in one day! The landscape now looked more like being on a different planet with black lava rocks covered in moss covering the entire landscape in places or big barron fields of brown grass.

As always I have put together a little holiday video of our adventures which you can view below.

And you can check out the next part of the Iceland adventure which here: One night of fun in Reykjavik

Have you been to Jokulsarlon before and seen the amazing ice lagoon? If so, I would love to know what your experience was like so leave a comment below.

If you would love to travel around Iceland in a camper van then click on the link below for the awesome Campervans Iceland who will take care of all your needs. One night of fun in Reykjavik, Iceland 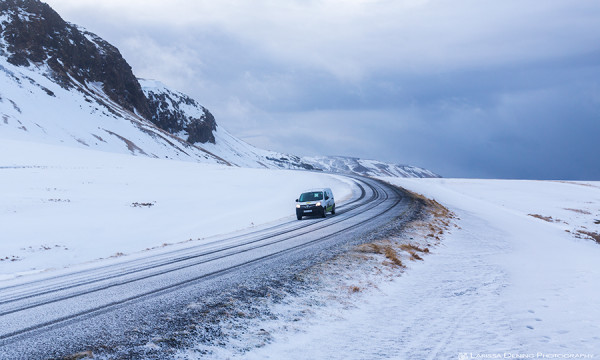