So I am back in Australia after a 23 day USA/Canada road trip. I will start with the first part of our Road Trip Los Angeles to San Francisco. We arrived at LAX at 6am after a 14 hour flight with Qantas from Brisbane. The flight was a good one except for the fact that I did not sleep a wink so it was a bit of a struggle to stay awake the entire next day. After arriving at the airport we picked up our hire car and headed out into the crazy LA traffic towards Venice Beach where we were staying for the night. It was the first time driving on the opposite side of the road so it was a bit scary for a while but it wasn’t long until we got used to it. We couldn’t check in until 2pm so we went had a relax on the beach for a bit to soak up some sun and try and recover from jet lag. Apparently being outdoors in nature is a great way to combat it.

Venice Beach is a very colourful place including the  people! We went for stroll along the boardwalk and saw muscle beach and had a browse through the markets. We were starting to get tired and hungry so we went for a drive along Abbot Kinney Road and found a lovely little organic cafe to have lunch at called Organic Kreation that serve delicious healthy food and a huge variety of juices which is what we needed after eating plane food the previous day. It was almost 2pm by then so we checked into our accommodation which we found through Airbnb and had a shower which felt amazing because we hadn’t had one for over 24 hours. Then we had a nap because we could hardly keep our eyes open and woke up just before sunset.

Of course when you are in the Venice Beach area you have to photograph the iconic Santa Monica Pier so thats where we headed. It wasn’t the most amazing sunset but we still had fun. Everyone was out and about enjoying the beach and playing beach volleyball. There is a really nice vibe to the area.

After sunset we headed to Bubba Gump Shrimp Co for dinner. First night in LA we had to have ribs because Americans know how to do ribs. And it was goooood! All in all a great day in LA. Its not the prettiest of places but it is fun.

The next morning we had a sleep in then got ready and headed to Cafe Gratitude for breakfast. This was the one place on my list of clean eating cafes that I was the most excited to try and it didn’t disappoint. The cafe has a Hamptons feel to it and the food is organic/vegan. Before you turn your nose up, give it a try because you don’t feel like your missing out at all. We both had a green juice and I had the sustain which is steamed quinoa with fruit salad on top. It was sooooo good. I would happily recommend this place to everyone!

Then we hit the road on our way to San Francisco. We took the Pacific Coast Highway through Malibu and headed up too Big Sur which was our stopover point for the night. It took us all day to get there because we kept stopping to take photos of the coastline.

We stopped at Big Sur because I wanted to photograph McWay Falls which I had seen a picture of years ago and thought – Im going to photograph that one day. It is a waterfall that flows onto a beach which is pretty cool. We made it just in time for sunset. Its not very well signed. Actually there is no sign for it at all. You just have to look out for the line of cars parked on the side of the road. Again, it wasn’t the best sunset but there was some really beautiful light as the sun was going down and it really is as pretty as all the  pictures that I have seen of it!

After the sun went down, we headed to our accommodation which was Glen Oaks, Big Sur and it was awesome accommodation. It had a fire place, and a beautiful big stone bathroom with under floor heating and filtered water! I would definitely be staying there again and I kind of wish we had longer to enjoy it! After checking in and freshening up we headed across the road for dinner which was a lovely Gumbo and then went back to McWay Falls after dark because I wanted to do some Milky  Way shots but unfortunately it was too close to a full moon which made the sky to light so it didn’t happen.

Stay tuned for Part 2 of our Road Trip: Los Angeles to San Francisco. If you enjoyed this article feel free to let me know in the comments below and don’t forget to follow me on Instagram for daily photo goodness from our trip. 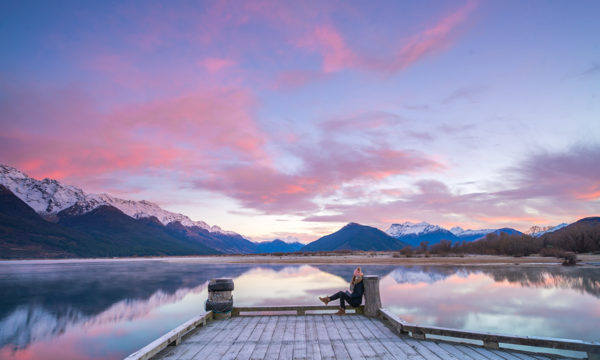