As part of my European vacation I was dying to tick of a few bucket list items even though I was cramming them into an already jam packed itinerary. But that’s the way I roll. When I am on holidays there is no time to rest. After spending 24 hours in Halstatt (which was no where near long enough) the next stop was a Micro Adventure to  Neuschwanstein Castle, Germany. This is the castle served as inspiration for Disneyland’s Sleeping Beauty Castle. And its sooooo pretty!

Neuschwanstein Castle (pronounced New Swan Stone) is a nineteenth-century Romanesque Revival palace on a rugged hill above the village of Hohenschwangau near Füssen in southwest Bavaria, Germany. The palace was commissioned by Ludwig II of Bavaria as a retreat. The palace was intended as a personal refuge for the reclusive king, but it was opened to the paying public immediately after his death in 1886.

We arrived at Füssen in the late afternoon after driving through some very scenic forests and beautiful fluffy white snow. We also got to drive along the Autobahn and I am proud to say that Andrew got the hire car up to 160kms per hour. I was hoping to go faster but someone in front slowed us down. Mind you there were still cars zooming passed us at that speed. ?

After arriving at Füssen we quickly checked into our accommodation and headed off to see the castle.

It was a 40 minute walk up to the castle and it was getting close to sunset so we paid 12 euro to hitch a ride with the beautiful old clydesdale horses. Well worth the 12 Euros as it is a very steep climb.

Once we got to the top and jumped off the carriage we went for a bit of a walk around the castle. It was magnificent but I was looking for one particular spot so that I could capture the shot I wanted of the castle. It was getting close to sunset and we eventually realised that the spot we needed was closed off. Apparently they close the track into the forest because its dangerous in Winter with slippery snow on the ground.

After waiting for a bit until no one was around we climbed around the fence and made our way into the snow filled forest. It was scary but exciting at the same time. I didn’t fly to the other side of the world  and not get the shot I wanted of this magical castle.

After coming to a dead end at the bridge we noticed there were some tracks through the mud that ran off the main path so we went to have a look and scrambled up a steep bank to come out to views of the castle.

It wasn’t THE view which was from the bridge but it was close enough. The bridge had a massive steel gate on both ends of it. There was no way of getting onto it.

The view from here was good enough.

The sky didn’t really change much more than what you see in the pic above. It was just breathtaking to see this gorgeous castle surrounded by pine trees and snow. I didn’t need a big pink sky.

Once the sky started getting dark we headed back down to the car with a spring in our step. We had seen the castle from a gorgeous viewpoint and had the place all to ourselves. Plus we didn’t get caught! I always love a good adventure!

After arriving back at the car we drove back to Fussen to get some dinner.

The girl at reception of our hotel recommended a place that served traditional German food called Gasthof Krone. The place was really cool with traditional german furniture and the staff dressed in traditional german outfits. The place was also full of customers which is a sign of a good restaurant. We had potato soup for staters which was delicious. I had pork fillet with mac and cheese (weird combo)  and Andrew had pork spare ribs. The meals were massive and we couldn’t get through it all but it was tasty and an awesome experience.

The next day we hadn’t really planned anywhere to go for sunrise plus it was pretty cold and starting to snow. We decided to go for a walk around the town square of Fussen. With pastel coloured buildings and cobblestone streets, I fell in love with Füssen.

We stopped in a the local bakery to pick up some pastries for the trip that day. I can never go passed a cinnomon scroll! ?

After checking out of the hotel we drove to Munich through big soft fluffy snowflakes. It was beautiful. We left the car in Munich and jumped on the train to Paris. Our next destination for the next four days!

Even though we were in Füssen for less than 24 hours, I had a really good time and absolutely loved this little town. I would love to spend more time exploring the beautiful country of Germany! I would also love to go inside the castle and spend a few hours looking around. Apparently it is spectacular inside.

Have you been to Füssen or Neuschwanstein Castle before? What was your experience like? I would love to know so leave a comment below. The Great Ocean Road in 72 hours 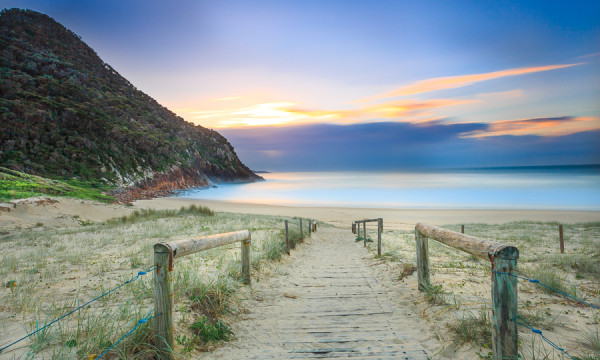 10 thoughts on “Microadventure to Neuschwanstein Castle”