On my recent European vacation I spent 24 hours in Rome before moving on to Venice. I was unsure how long to stay in Rome as I had already been there once before but it turned out that 24 hours was all I could allow and was all I needed really. So let me give you the quick unconventional guide to Rome.

Firstly, I will tell you about what not to do in Rome. Don’t stay where we stayed which was the San Giovanni area. It was a pretty crappy area. We stayed in an awesome AirBnB place but the area was really dirty and kind of a pain to get anywhere.

The last time we were in Rome we stayed near Roma Termini Train Station which is the main train and Metro station and was so convenient. It was a pretty dodgy neighbourhood but the convenience made up for it.

If I go back again I would stay somewhere near the Spagna metro station. It seemed like a beautiful part of Rome.

Other things you need to be prepared for if you haven’t visited Rome before: they smoke a lot and they are very abrupt and straight to the point. Coming from Australia I found them to be quite rude but that is just their culture and its something that you do get used to after a while.

Ok, so that is all the bad stuff I need to warn you about. Lets get to the good stuff!

The one thing that you need to see is the Colosseum. This place is so old and just one of those big items that you need to tick off your bucket list. You can do a tour of the inside but we didn’t have time for that. You can walk completely around the outside of it though which is just as impressive and the best time to see it is at night when there are way less people around. It still boggles my mind the things that happened within the walls of that place, but I guess it was a different time back then. Thank goodness times have changed!

The second thing you need to visit when you are in Rome is Fountain De Trevi. I’m not sure if its the aqua blue water but I just find this fountain astoundingly beautiful.

Its kind of bit of a mystery to find this place. It is literally tucked in the back of an alleyway. You need to get off at Barberini Metro and walk down Via del Tritone, turn left into Via della Panettaria and follow the dodgy little sign that says Fountain De Trevi down a dark alleyway!

The fountain was built on the facade of a palace. It is so much bigger than you realise from seeing it in pictures. Of course, there are always thousands of people here at all time and hawkers trying to sell you selfie sticks and roses but if you ignore all these things and push your way to the front of the crowd you can enjoy it for a few seconds at least. The best time to view it is early morning before the crowds arrive at about 5am. It is much more peaceful then.

The tradition is to throw a coin over your left shoulder into the fountain for good luck. An estimated 3,000 Euros are thrown into the fountain each day. The money has been used to subsidise a supermarket for Rome’s needy.

The third thing you need to do in Rome is go to the Vatican City and see the Sistine Chapel. This is an absolute must. The paintings and artwork will absolutely blow your mind. There is so much to see that you actually are unable to take it all in and appreciate it. I highly recommend booking a “Skip the line” Vatican Museum ticket. This way you get to see it all before the crowds are let in. Of course there are other tours taking place at the same time but it’s only half as many people as there normally is.

You also get a tour guide who explains everything to you in detail. The guide will point out things in the paintings that you would never of known were there like the face of Michelangelo. The artists were never allowed to sign their names on their artwork in that era, so a lot of them would sneakily paint there portraits in obscure places.

The sistine chapel and the amazing painting of the “Last Judgement” is obviously the highlight of the tour but I think the gallery of maps room is highly underrated. I was unable to capture the grandeur and elegance of the Vatican Museum. It’s just one of those things that you have to see with your own eyes to really appreciate.

After walking for a while through some beautiful rooms full of stunning artwork you get to the Raphael Room which is one of most famous after the Sistine Chapel. Raphael’s artwork is astonishing.

There is a secret door in the Raphael Room which takes you down a narrow corridor to the Sistine Chapel which is the room that Michelangelo spent four years of his life perched on scaffolding with his brush in hand. Unfortunately you are unable to take photos in the Sistine Chapel so I will just have to leave it to your imagination or you can google pictures of it. It is amazing to think that this man who claimed he was not a painter but a sculpture created such astounding artwork. You don’t see paintings like this these days and that’s what makes them so special. They are extremely beautiful and you don’t have to be a religious person to appreciate them.

Upon exiting the sistine chapel you walk down the famous stairwell to exit the museum. Every inch of this place oozes wealth and beauty.

The last time I went to Rome I didn’t get a chance to see St Peter’s Basilica so it was on my list this time and it was so worth it. I am not a religious person at all, I just find the architecture, sculptures and paintings from the Renaissance era absolutely stunning.

It’s really hard to describe the magnificence of this church. The opulence of the interior bears testimony to the wealth of the Catholic church in the sixteenth and seventeenth centuries. It is decorated with large monuments, many of which were created by Bernini, one of the greatest artists of all time.

The most famous monument in the St. Peter’s Basilica is the Pietà, a marble sculpture of a young looking Mary holding the dead body of her son. It was created in 1499-1500 by Michelangelo at the early age of twenty-five. It is the only work of Michelangelo that bears his signature. He etched his name on the ribbon that runs across Mary’s chest, allegedly after he heard that people attributed his work to another artist.

One of Bernini’s main creations that draws the immediate attention of visitors is the enormous, twenty-six meter high bronze baldachin over the papal altar. The Baroque masterpiece is crafted from bronze that was taken from the ceiling of the Pantheon.

Most of the paintings in the church are replicas of the original paintings created for the basilica, many of which are now on display in the Vatican Museum. The high humidity in the church ruined the oil paintings which started to suffer from mold damage.

The floor of the basilica has a colorful marble pattern. Look for the red disc near the central door. In the original church it was located in front of the main altar. Emperors – most notably Charles the Great (in 800 AD) – were crowned while standing on the disc.

You are able to take a tour of the roof top which give stunning views over the whole of Rome but we were running out of time and had to move on.

Walk the cobbled streets and alleyways

Rome is such a unique and beautiful city with cobbled laneways and stunning piazzas scattered all over the place. All you need to do is walk and you will find something interesting. There are quaint little cafes and restaurants and beautiful old colourful buildings spread amongst high end fashion stores. It really is an eclectic mix of new and old.

The best place to watch the sun go down is along the Tiber River overlooking St Peters Basilica. The colours cast a beautiful golden glow over the city and the river and even though there are a thousands of people around and cars and buses rushing by the beauty of the sunset can easily wash away the noise.

Gelato from the shop at the top of the Spanish Steps

And of course you can’t go to Italy without having some Gelato. The best gelato I have found is the little cafe at the top of the Spanish Steps. My favourite flavour is Pistachio. There is never a bad time to eat Gelato. Even though it was about 5 degrees I was still getting my fix!

And that brings us to the end of my Unconventional Guide to Rome or rather my 24 hours in Rome. It was a bit of a whirlwind but that’s the way I like it.

Have you been to Rome before? What are some of your favourite things to do? I would love to know, so leave a comment below! 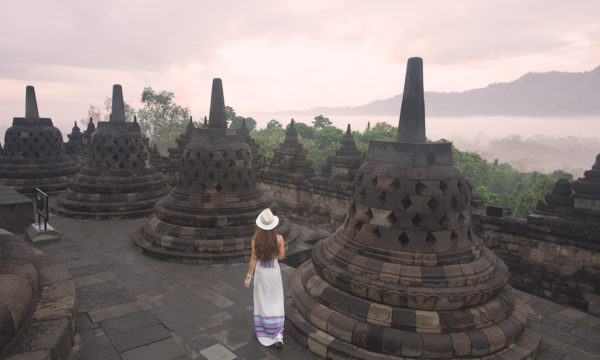 I found heaven on Earth at Whitehaven Beach, Queensland

11 thoughts on “The unconventional guide to Rome, Italy”