Again I hear you say – “Where? Why would you go there?” with  a confused look on your face, but let me explain! The columbia river gorge is the holy grail of waterfalls. There are over 90 in total on the Oregon side. The columbia river gorge is the border between Washington State and Oregon. The area of Hood River is also known for the numerous amounts of organic orchards, farms and vineyards so it is also a foodies paradise. But first we need to continue on from the last road trip which left us back at Bend, Oregon.

There is a lot to see on the trip between Bend and Hood River. There is the famous Mt Hood which you can see from numerous locations. We chose to stop at Trillium Lake to photograph it. Unfortunately by the time we got there is was way too early, the sun was still way to high in the sky so we had to make the decision whether to hang around or continue on. I was dying to photograph it from this location as you get an awesome open view of it. There was a little bit of a  lenticular cloud hanging around the top of Mt Hood so I was getting a little bit excited because this was the first time I had seen one of these types clouds and I had seen some awesome photos with these clouds in them.

It was still ages until sunset so we headed off down the road to the Visitors Information Centre and asked what else was in the area.  A lovely lady gave us the hot tip that there was a lovely walking trail and waterfall in the area called Zig Zag Falls so we jumped in the car and headed up there. The short walk along the river with moss covered trees and rocks and dense forest was stunning. Im so glad we got to see this hidden gem.

My  husband has a habit of taking bad selflies with my iPhone for me to find later. It gives me a good giggle. He tells me that this is what he sees throughout our holidays. Me behind the camera so he now fills in his time taking selfies. Now don’t go feeling all sorry for him. He does actually enjoy our holidays and wouldn’t have it any other way. Like he says, “if we didn’t have photography we would never have been to half the places that we’ve been too or seen the amazing stuff we have seen!”

After exploring this gorgeous little surprise of a trail we headed back to Trillium Lake to find a spot for sunset. Fingers and toes were crossed that it would be a blinder and that the lenticular cloud was still hanging around.

It wasn’t to be. The lenticular cloud seemed to have disbursed into a big band of fog that was now covering most of the mountain. We waited and waited and waited but no colour came. I probably got one good shot before it all turned to sh*t!

Feeling disappointed we headed off towards Hood River for the night but with excitement brewing about the amazing waterfalls we were going to explore tomorrow. We had dinner at The Mesquitery which was recommended by the lady on the front desk of our hotel. Apparently its a favourite for the locals. It was a casual laid back place with big open booths for seating and an extensive menu. I had clam chowder for Entree and Smoked Salmon fettucine. OMG! Amazing food. Andrew had the ribs which were also delicious. I highly recommend this place. It was the first time I had tried Chowder too which I was really excited about because I always remember the episode from The Simpsons:

Hehe, everytime I hear the word chowder I think of this for some silly reason! After dinner we stopped in at Walmart to get Andrew some warm clothes for the Canada leg of our trip as it was starting to get chilly the higher we climbed.

We found some gorgeous headwear:

I will spare you the REALLY bad photos. I can’t believe Im even showing you these! Unfortunately the fun police (aka Andrew) wouldn’t let me buy my beanie! I have a bit of a beanie fettish and I guess I can’t complain because I had already bought two by the time we had gotten to Hood River and ended up buying another one in Seattle! You just can’t get this sort of stuff in sunny Brisbane so I gotta make the most of it while I can!

The next morning we were up mega early to explore Oneonta Gorge which is pronounced Oh-nee-AHN-tah but I could never remember how to say it properly so I just called it One-Onta. Sorry to the people of Oregon but its really hard to remember! I was also mega excited because this was one part of the trip I was dying to see.

Oneonta Gorge is known for the treacherous slippery log jam that you have to cross over and the chest deep ice cold water. I have to admit that I was actually really nervous coming here because I know the adventurer inside of me would be telling me to go for it and the rational side of me that absolutely hates the cold would be saying don’t you dare! I was pleased to find that the first 1/3 of the walk through the gorge was only ankle deep and my waterproof hiking boots were preventing me from getting wet so far. We crossed the log jam quite comfortably without any spills luckily.

It was worth the excitement and nervousness and slippery log jam just to see even this little part. I struggled to capture how beautiful it really was!

Then we hit the ice-cold water that was so cold that you don’t feel cold anymore, you just feel pain. Ive never felt anything like this before and I was only knee deep so far.

Luckily there was a shallow part right on the edge so that you could thaw out. We also noticed a guy right down the end near the waterfall that was running around with no shirt on building a huge cairn. We stood and watched him for a while because as soon as he was nearly finished, the pile would fall over and he would literally jump around yelling and then start all over again. This happened at least 8 times. Once we was finished he casually swam back through the ice cold water and has a chat to us. Then it all made sense, he was a crazy pom! haha. I find English people the funniest people on the planet after living there once. I love their sense of humour. We navigated our way to this point before we had to traverse the deeper waters.

The water on the other side of this log is where it gets really deep. It doesn’t look that deep but two guys passed by us at this stage so we watched them go through. One guys was about six foot tall and pretty built. We heard a few huffs and puffs and squeals when the water hit their goulies and we had a bit of a chuckle. The water was up to the tallest guys nipples, so that was it for me! There was no way I was going through that. I am a bit bummed now that I chickened out but there has been stories of people being rushed to hospital for hypothermia from trying to cross through here and that surely would have been me too. This was a close as I got to the falls:

I am proud of myself for making the effort to see this place. It was definitely worth it and you really can’t capture the beauty with a camera. I will be keen to get back here again one day. Maybe in summer although Ive heard you can’t move through here in summer because its so popular. The rest of the day was spent exploring a few other waterfalls which I will talk about in the next blog post. Caio for now!

Have you ever been to Hood River or the Columbia River Gorge before? If so let me know in the comments below! 🙂

P.S. You can read the next instalment of our adventure here: 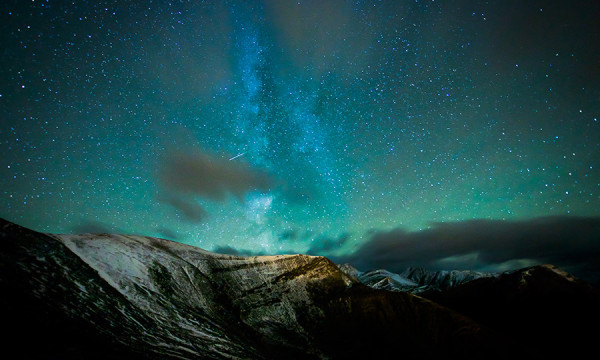 One Perfect Day in Jasper, Canada